Acts of Hope...giving back one photo at a time...capturing memories that will last a lifetime. 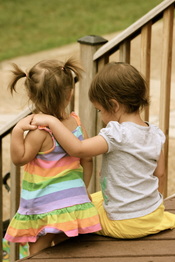 Love you more...
In honor of our first child (Kieran Brooke Snyder), who we lost in March of 2008, I would like to give back to families who are struggling with the loss of a child, taking care of a child who is sick, or battling something of their own.  Our world came crashing down on March 14th when we discovered during a routine visit that our little Kieran’s heart stopped beating. On March 15, 2008 at 7:05pm, at nearly 21.5 weeks, we gave birth to Kieran…he was stillborn. There was no warning and no signs that Kieran would not have a chance to live outside the womb.

In May of 2009, we were blessed with a beautiful baby girl named Avery. She is very healthy and the most amazing miracle we could have ever dreamed of. We received phenomenal care throughout our pregnancy and we are very thankful for the doctors and nurses who took such great care of my family and I. In February of 2011, we were blessed with another a beautiful baby girl named Riley. Despite being on bed rest for a little over a month with concerns of preeclampsia, later developing preeclampsia, and delivering our little Riley at 35 weeks and 6 days, she’s doing wonderful. Again, the medical care and treatment we received was wonderful and we are so very thankful.  Although Kieran is not physically here with us on earth, we believe he lives on in our hearts. We have a very special little angel in heaven watching over each of us and we want to spread the love and hope we hold so dear with others. We realize that every little bit helps…and we believe that 1 person or 1 family can truly make a difference.

When we were in the hospital, we were very blessed that one of our nurses captured a few photos of our sweet angel Kieran.  Words cannot express how important those photos are to my husband and I.  They can never be replaced and are the only photos we have of our sweet little angel.  The photos are kept in a small little album right by our bed and each night I kiss our little man goodnight and tell him I love him more.

Experiencing the loss of a child, I know first hand how incredibly painful it truly is.  I want to try and give back and touch the lives of other families who are struggling with this incredible pain and hurt.  One of my favorite songs: "I Was Here" by Lady Antebellum says it perfectly:

If you or someone you know is in need of this service, please feel free to contact me.  These photo shoots and videos are at no cost.  With the strength of my sweet little angel Kieran right by my side, I only hope I can make a difference in the life of another family and provide them with the precious memories, moments of happiness, and little miracles.

Act of Hope: "A lifetime of love poured into 9 days of life." 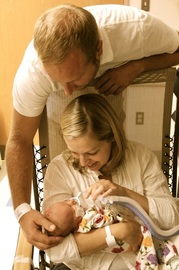 "a lifetime of love poured into 9 days of life."
A few years ago... my heart was touched by a beautiful baby angel girl...little baby Eloise.  In just 9 short days, she touched the lives of everyone around her and my life has forever changed having the chance to hold her tiny little hand.  Little Eloise passed away due to complications from Trisomy 13.  I had a chance to be with her family for a couple days capturing every little moment I possibly could.  Every moment I looked at her, touched her tiny little hand, and marveled at her strength, I knew was in the presence of a very special little girl.  On the 9th day, sweet little Eloise passed away in her mommy's arms.  She is a now a very special little angel in heaven. I was blessed to spend that day with such a beautiful family trying to capturing those very special moments. May god bless this sweet little angel and their beautiful family.

Act of HOPE:_ "She is clothed with strength and dignity and laughs without fear of the future. ~ Proverbs 31:25."

And though she be but little, she is fierce. ~ Shakespeare

Hannah Grace Shultz was born on July 13th, 2013 with a very rare heart condition, Hypo Plastic Left Heart Syndrome, that causes the left side of the heart not to function. She immediately underwent the first of three planned open-heart surgeries. A few months later, she had the second. Conquering them both, she was progressing well and now has grown into a happy and healthy 18 month old giggly toddler. She loves cuddles, laughing with her big sister Addie, cookies, and ‘Let it Go!”  On December 30th 2014, while on vacation with her family in Delaware, Hannah became ill and was taken to the A.I. duPont Children’s Hospital in Wilmington. She eventually went into cardiac arrest due to an extremely rare blood clot in her heart and CPR was performed for 55 minutes. Once stable it was determined that her heart could no longer function on it’s own, so on January 2nd, she underwent surgery to receive a mechanical heart called the Berlin Heart.

On January 22nd, 2014, her beautiful mother Beth shared this: "It is with much sadness that I share that Hannah Grace suffered another large stroke this morning and will not be able to move forward with the transplant process. She is currently being evaluated for the gift of life program in the hopes that she can be of help to someone else. We are gathering to say our goodbyes and are so thankful for all the love and support we have received. We will celebrate and honor her and will share the details of that celebration when they are available." Sweet baby Hannah Grace was called to heaven on January 23rd.  "He heals the brokenhearted and binds up their wounds." ~Psalm 147:3

I created a website for sweet little Hannah and her family to share her story and journey.  For more information, visit: http://hopeforhannahgrace.weebly.com/ 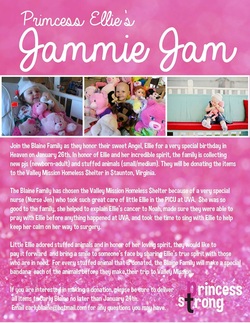 After little Ellie passed away, her family wanted to do something to honor their sweet angel.  In honor of Ellie and her incredible spirit, the family wanted to collect new pjs (newborn-adult) and stuffed anmals (small/medium) and the donated the items to the Valley Mission Homeless Shelter in Staunton, Virginia.  I designed a flyer for Princess Ellie's Jammie Jam.

Act of HOPE: A childhood friend of mine was diagnosed with Chiari Malformation in February 2012 and is still fighting complications.

kate and sophie from Lisa S on Vimeo. 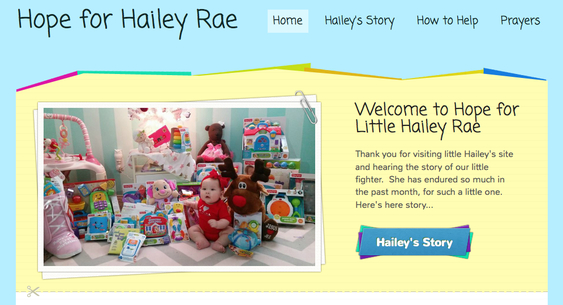 In early February, my cousin's beautiful little girl, Hailey Rae began battling the flu.  On February 6th, she was admitted to the hospital because she was having trouble breathing and fevers that were spiking.

On February 7th, little Hailey was moved to the ICU for constant supervision and so the doctors could monitor her more closely. She then was transferred to the PICU because her little body wasn't responding to the treatments that were being administered.  While in the PICU they had to intubate and place her on a ventilator.  In addition, she was also placed on a feeding tube and received tons of antibiotics through an IV.  As if that wasn't enough on her little body, she also had a staph infection that she received while in the hospital and had to receive a blood transfusion.  This little girl has been through so much in such a short period of time.

Since being admitted to the hospital in early February, there have been a few times where doctor's have taken the tubes out and as well as taking her off the ventilator.  Unfortunately, little Hailey's body is still struggling to breathe on it's own.

On March 4th, Hailey underwent a surgical procedure so doctor's could see if there was anything obstructing her airways.  The procedure revealed that there is a long section of her airway that has significant granulated scaring resulting from the staph infection she received at the hospital after her initial intubation. The area was dilated and she was intubated once again. It will take a few days to determine how successful that procedure was, since extubating her will also cause irritation and inflammation as well. The doctor also indicated she will likely require more than one of these procedures to resolve the problem because the affected area is so narrow. He said Hailey will likely be facing a long road to recovery.

My cousin and his family have been through so much this past month and watching their 8-month little girl having to endure so much has been extremely difficult.  Aaron and Gabby are such wonderful parents and I am continually amazed by the love and strength they have for their little girl and the family around them.  They have put their faith in God and grateful for every prayer and every miracle. For more information visit: http://hopeforhaileyrae.weebly.com/

HOPE: "To touch a few hearts in this life, leave nothing less...than something says "I was here"